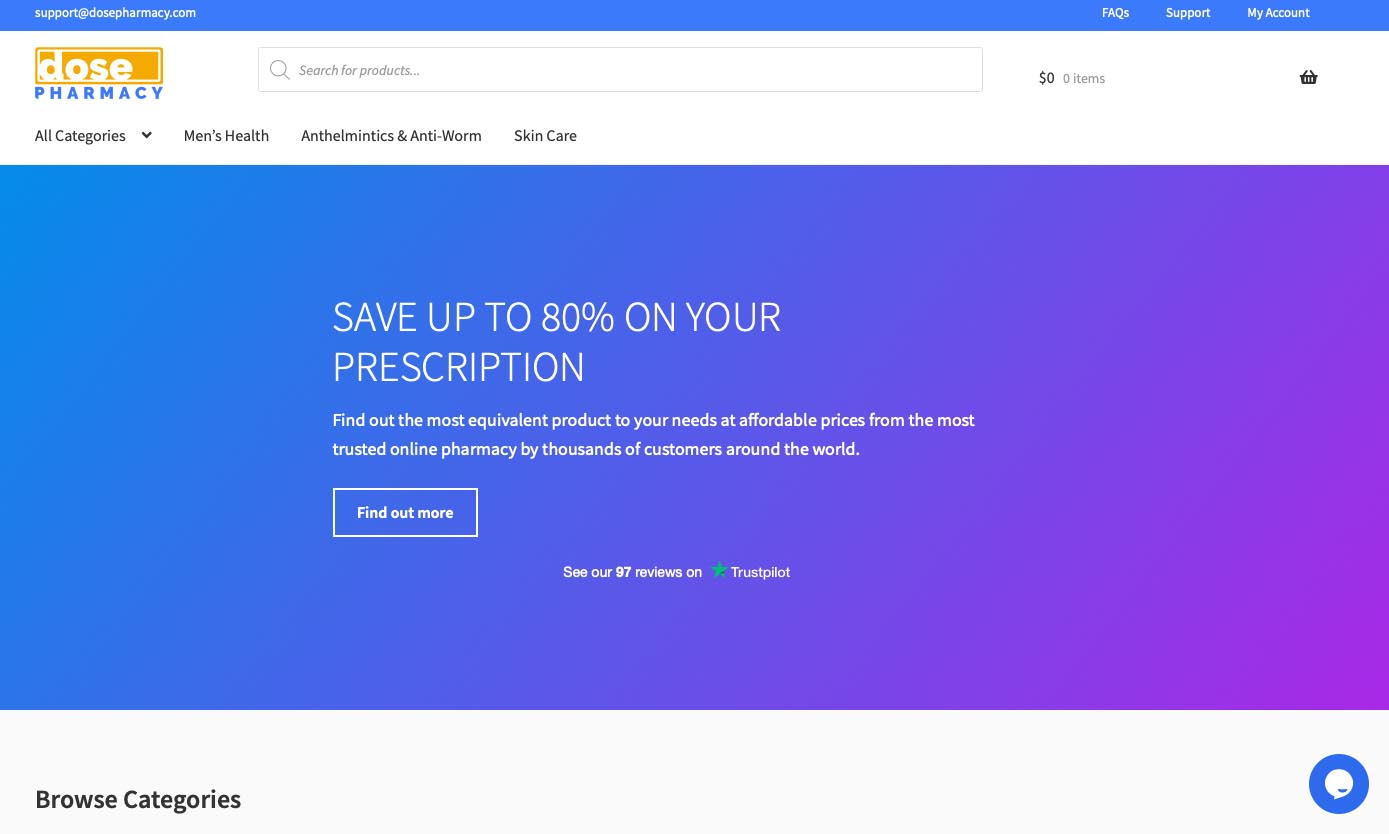 Dosepharmacy.com is an online drugstore from India that sells medical products. They guarantee amazing savings, a wide selection of genuine products, and a secure platform. They have made every effort possible to put potential customers at ease. However, their platform is somewhat disturbing. It doesn’t give visitors any confidence in its reliability. No one would fault you if you started to question whether or not it was a scam.

The domain age is poor. The owner created the domain on the 20th of August 2019, which makes the company less than five years old. Not only is the domain young but it might expire in a few months. The owner has the option of extending the registration. But if he fails to do so, the domain will disappear. Doing business with stores that do not have long to live is problematic because they can defraud you without any fear of repercussions.

The owner has decided to use a privacy service to hide his identity as well as the details associated with his website’s activities on the internet. Some authentic businesses use similar tactics for legitimate reasons. However, scammers also use these tools to make their fraudulent activities even more difficult to detect.

But scamadviser.com isn’t particularly worried. It gave them a rating of 100 percent, which shows that it has a considerable amount of confidence in the platform’s legitimacy and legality, probably because it noticed their valid SSL Certificate and positive reviews.

This drugstore has a terrible website. Even though it was created in 2019, it is still unfinished, which is odd. The platform is missing several critical sections, which is very unprofessional. In fact, the design will most likely repel many consumers who do not want to give their money to a site that looks like it is owned by an amateur.

The name (Indian Pharmacy) is bland. It strongly suggests that the portal is Indian. But it doesn’t reveal anything else. The owner included a list of the biggest medical suppliers in the world but he cannot prove that his medicine comes from those suppliers.

At this moment, it is impossible to pin this organization down. Are they a real pharmacy? Do they run a referral service? Is the owner a medical professional? Does he employ licensed pharmacists? Is their drugstore small, medium-sized or large?

They collect quite a bit of information. It looks like customers are expected to register before they can access certain sections of the site. However, their SSL Certificate will dispel some of the suspicions because it shows that the information clients volunteer is relatively safe.

They haven’t been certified by Legitscript.com. It calls them a rogue internet pharmacy. They have also failed to secure accreditation from CPA, MIPA, CIPA, and every other major regulatory body.

Admittedly, there are plenty of legit Indian sites that haven’t been accredited by resources like legitscript.com but they have Indian licenses. At the moment, this site has failed to prove that it falls within that same category.

They sell generic medicine that falls within the following categories:

They do not take responsibility for the effectiveness of the drugs they sell or any side effects you may suffer by taking their medicine.

You have to use PayPal to make payments on this platform. This is the only payment option they offer. Interestingly enough, they deliver to less than a dozen countries, including Afghanistan, Belarus, and Australia. They do not ship to most of the major global destinations, which tells you that they are quite small-scale.

They use Express Mail Service and Registered Airmail Postage. You are supposed to receive your packages within 10 working days. Though, they want consumers to wait at least 30 days before asking the drugstore to resend packages that have failed to arrive.

Even though they have so many suspicious attributes, the organization has excellent reviews on trustpilot.com from people that love the quick deliveries, discreet services, and clear communication lines.

The internet pharmacy looks like a scam. And yet the people that have used their services are quite happy with their offerings, which is why they get a trust rating of 60%.