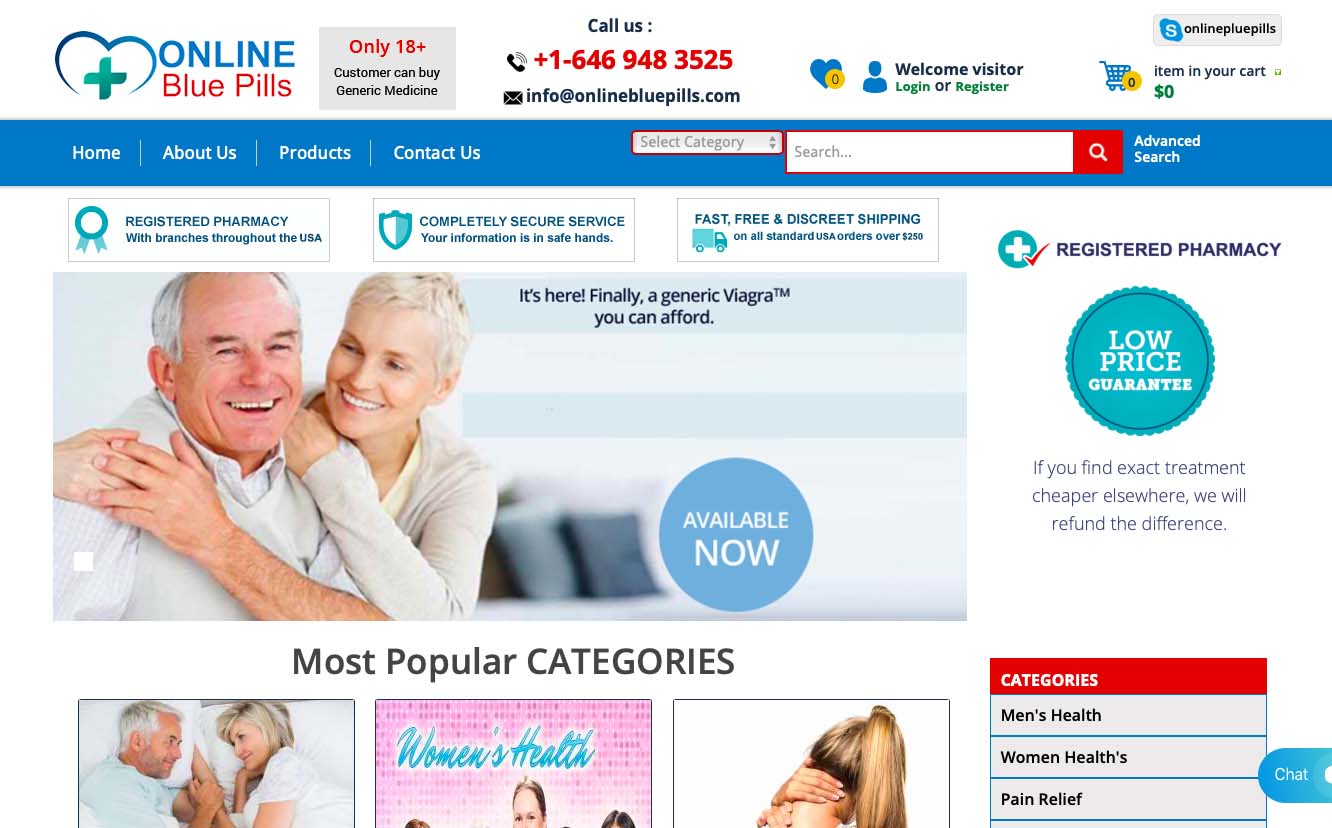 Onlinebluepills.com is an Indian online drugstore. On the surface, they look quite promising. However, their entire operation begins to fall apart once you look beneath the surface. The fact that they have admitted that they come from India is encouraging. India produces a lot of counterfeit medicine and Indian drugstores have been known to pretend to originate from other countries. This one loses its credibility because it only admits to its Indian origins in some places. In other places, it goes out of its way to pretend that it is Canadian, which isn’t true. This puts all the other claims they have made into question. 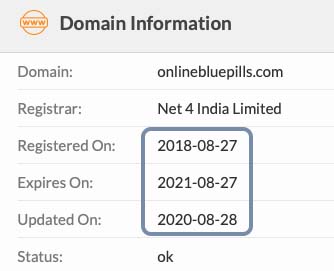 While the store has suggested that it has a decade of experience, in truth, it was created two years ago on the 27th of August 2018.

Naturally, this makes them far too young. Even if they hadn’t lied, two years is too short. If you have decided to buy medicine from the internet, you should only do business with companies whose experience exceeds five years.

Their scamadviser.com rating is high. At 85 percent, it will trick you into thinking that the portal is legit. Scamadviser.com was obviously impressed by their SSL Certificate. However, that isn’t enough to resolve all the suspicions surrounding the store.

Yes, the SSL Certificate is a good thing because the platform appears more secure. But the anonymity of the owner is quite concerning, and so is the poor Alexa rank. While scamadviser.com doesn’t have a reputation for lying, it can make mistakes. After all, the rating it assigns comes from an algorithm. Human beings are not involved in the vetting process.

The store falls apart in several places. You can’t ignore its appearance. It definitely looks legit. But it also claims that it came online in 2010. That would normally earn the average internet pharmacy the trust of the public. A decade of experience is nothing to scoff at. Any store that can stick around for that long has to be doing something right.

But in this case, that claim is a lie. The company has two years of experience as of this moment, no more. This is the most damning aspect of their business profile. They have no way of explaining this lie away.

That is another blatant lie. At this point, their Indian origins are the only fact about their operations that anyone knows. Everything else they have said is highly suspicious and most likely false. There is no point in transacting with a platform when you can’t trust the things it says.

Like their age, they have falsely claimed that they are a registered pharmacy. But they haven’t revealed the country where they are registered. It isn’t the US. Legitscript.com calls them rogue because they are not one of the few pharmacies that have been authorized to work in the United States.

Even though they are Indian, they are not registered in India either. In fact, as far as anyone can tell, they are not authorized to operate in any country.

They claim to sell products in categories such as:

They sell a lot of generic medicines that are very cheap. Not only do they have some of the lowest prices around but they have promised to give their customers a refund if they find cheaper treatments in other places.

They are quite confident in their prices. Though, they cannot prove that their merchandise is genuine. The platform accepts Maestro, MasterCard, and Visa.

For a company that has supposedly been in business for a decade, it is odd that they don’t have reviews anywhere on the internet. The one testimonial on trustpilot.com is excellent. But you cannot trust one review.

They haven’t given their customers any significant reason to trust the things they say, which is why they earn a rating of 25% of trust.