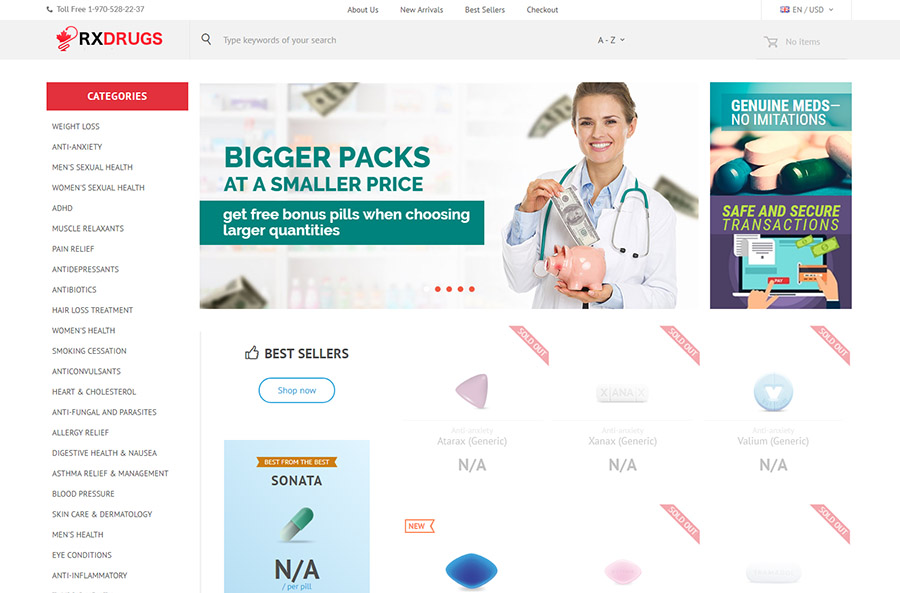 RxDrugs.to claims to sell drugs in a rather ‘broker’ method. They act as a broker or middleman between the licensed pharmacy and the patients themselves. They also claim to offer confidentiality to your drugs at all times when you make a purchase. Their landing page is one awesome looking display that entices you to do more on their site than just look up for your drugs. Also, each drug has been explained fully just before you make your purchase hence you can never go wrong onto buying the wrong medication. We decided to do a thorough review of this pharmacy to know its credibility. Is it a scam or is it something you can trust?

The domain name of this online pharmacy is RxDrugs.to. The registrar of this pharmacy is Tucows Domains Inc. They registered this pharmacy on 1998-06-25 and it expires on 2019-06-24. It was last updated on 2018-05-26. This is the longest domain name I’ve met since I started reviewing online pharmacies. It has a whopping 20 years of services which makes it well grounded in the market to offer services. By theory, an online chemist established 20 years ago should be a very well developed site by now with a reputable name. 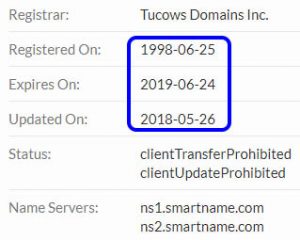 The website is located in the United States and hence is strategically placed for customers to deal with it in case of any complaints of requests. Most rogue sites have multiple countries likelihood and hence its a bit harder identifying the actual country that harbors the business. According to the domain name, this business has been in existence for approximately 20 years hence it has a good ground to play in. 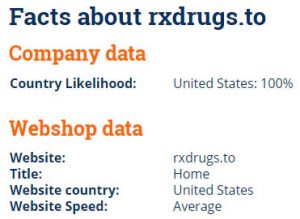 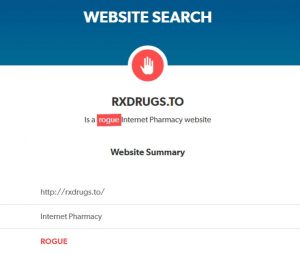 On checking the online pharmacy on ScamAdviser, it has a great rating of 100% meaning the site is trusted or can be trusted. It only has 36 report requests from people. The site is located in a safer country which is not ranked high risk. However, the server of this site has 89 other suspicious sites which might affect the rating of this actual site. The websites on the server have a rogue report on various sites which scans for credibility. Thus tread with caution when using this site.

LegitScript, on the other hand, has marked this site as a rogue operating online pharmacy which makes it a scam. LegitScript is a body that regulates online pharmacies by giving you advice on whether a chemist is a real or rogue operating. By been marked as a rogue operating entity, it, therefore, means that they knowingly violate the set standards of the sale of drugs and medicinal products. They do not abide by the set rules and regulations of drugs supply. Been rogue also comprises of engaging in conman activities and fraudulent deals which when revolving around human drugs could be big trouble. Avoid this pharmacy until its status are upheld by LegitScript.

Their products aren’t cheap or discounted like of most other sites. It could give you a hint that they are selling legit drugs and not substandard drugs. The drugs they sell include:

Most of their drugs have been sold out or do not exists in their list of products. In fact, I’ve done several checks and it seems all the drugs have already been sold out leaving out no drugs in their store. Does this show something? The site might have been dormant for a very long time such that the management doesn’t even think about it. This is an alarming state of this pharmacy.

The site allows members to pay using various methods which include VISA, MasterCard, and JCB. You can select your most preferred method for performing business with them. As most pharmacies are, they have two methods of shipping which include the Airmail and the EMS. The EMS service is expensive a little bit and you can be able to track your product as it is been shipped. It takes a shorter time of less than a week. The Airmail service has no tracker and might take from two weeks to a month. The website has no security system of payments hence be very careful when lending your financial information to them. It might be true that the site is a rogue entity.

It is very weird for an online pharmacy to be in existence for over 20 years and it doesn’t have any reviews on TrustPilot. That tells you it either a scam site or it was operating as another site before transforming to a drug selling store lately. The whole thing just doesn’t look real and it’s better when you keep a distance until they rectify their issues.

In conclusion, this online pharmacy deserves a 35% trust rating. It needs to do some paperwork to get approved by these regulatory sites. At the moment, be careful when using it.