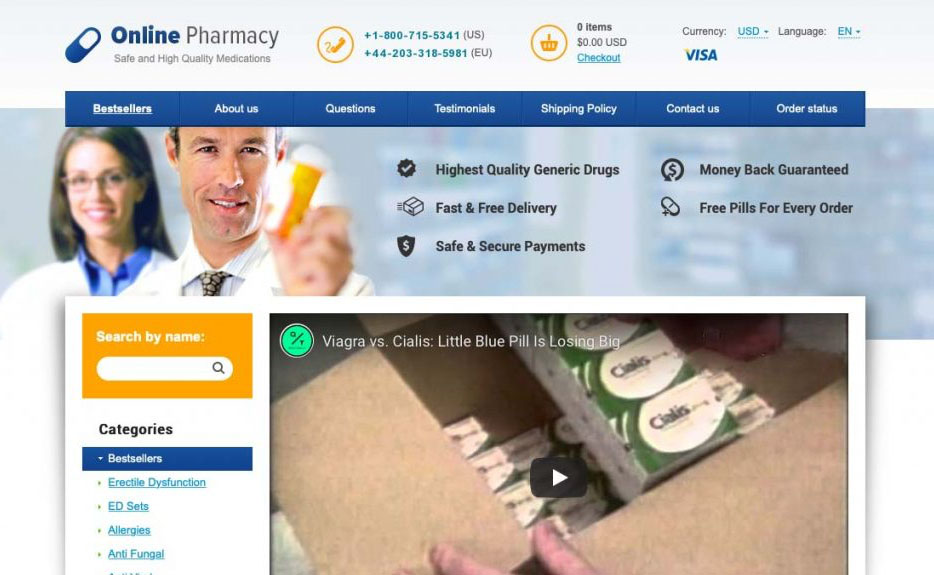 Viagra-canadian-pharma.com is exactly what it sounds like, an internet pharmacy that sells sexual enhancers. Though, despite what its name suggests, it actually sells various types of sexual enhancers, not just the one brand mentioned in its domain name. If you have ever purchased medicine from the internet, you have probably encountered stores like this one. It has a bland look that was clearly copied from numerous online sources of sexual enhancers. You should be careful with websites like this that look so similar to one another. They are probably part of a network, and pharmaceutical networks are known for distributing counterfeit drugs. 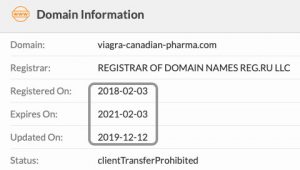 This website was created on the 2nd of February 2018, roughly two years ago. As you can see, the site is young. This doesn’t automatically prove that it is a scam. After all, ever internet pharmacy was once brand new.

However, the domain age should encourage you to be more cautious. After all, scams tend to hide in young pharmacies, and most people do not bother to investigate the domain age of the drugstores they transact with. They are quick to take them at their word and this exposes them to scams they could have avoided if they had investigated the domain age.

Scamadviser.com gave this medical store a rating of 31 percent. As you might have guessed, that is a low rating. But that isn’t the website’s only problem. Its setup involved three countries, namely: Germany, Russia, and a third unknown country.

The biggest concern among these three is Russia because it is a high-risk nation that frequently generates scams. This is why people are suspicious of websites that are connected to Russia. The pharmacy shares its server with over a thousand other portals, including:

As was noted above, this is a bland website that makes no effort to look like a professional medical store. This is bound to put some people off. The use of stock photos is strange because it is common practice for legitimate websites to use pictures of their workers, real people with whom you can interact over the phone.

When a medical platform of this sort chooses to use stock images, you cannot help but conclude that it probably doesn’t have any licensed professionals working behind the scenes. In fact, many internet pharmacies are operated by one or two people that have no medical knowledge to speak of.

As such, you cannot rely on them to provide satisfactory guidance with regards to your healthcare needs. There is no evidence proving that this site is operated by a single individual that doesn’t have any medical qualifications.

But there is also no evidence proving otherwise. The platform is very secretive in its operations. It has hidden its business address and the identity of its owner. You cannot verify its contact information or the claims it has made regarding the quality of its products.

You also can’t ignore the fact that it claims to have over seven years of experience. As you noted from the domain age, that is a lie.

Legitscript.com has dismissed this website as a rogue internet pharmacy that doesn’t meet the organization’s basic verification standards. Even though its domain name suggests that it is Canadian, it hasn’t been recognized by CIPA.

The medical platform’s main product is generic and brand name sexual enhancers. Though, as was mentioned above, the quality of the drugs sold here is suspect. 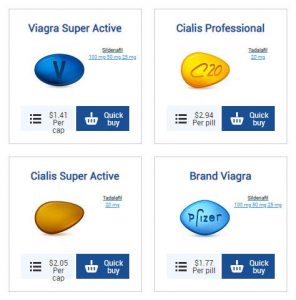 The drugs sold here are very cheap, which is why some people have dismissed them for being counterfeit. The pharmacy claims that its drugs are inexpensive because they don’t spend money on marketing and they don’t pay taxes.

This allows them to sell their drugs more cheaply than conventional pharmacies. They only accept credit cards and electronic checks. They want customers to believe that any financial information they volunteer is safe. But this can’t be proven.

Airmail and EMS Courier are used to make deliveries to customers in the US and abroad. It takes a maximum of three weeks for packages to arrive at their destination.

The reviews displayed on this platform are definitely fake. They have appeared on other websites. 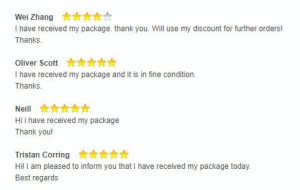 This website earns a rating of 20% of trust. It has no business address, it lied about its age, and it is using fake customer reviews. These are signs of a scam.