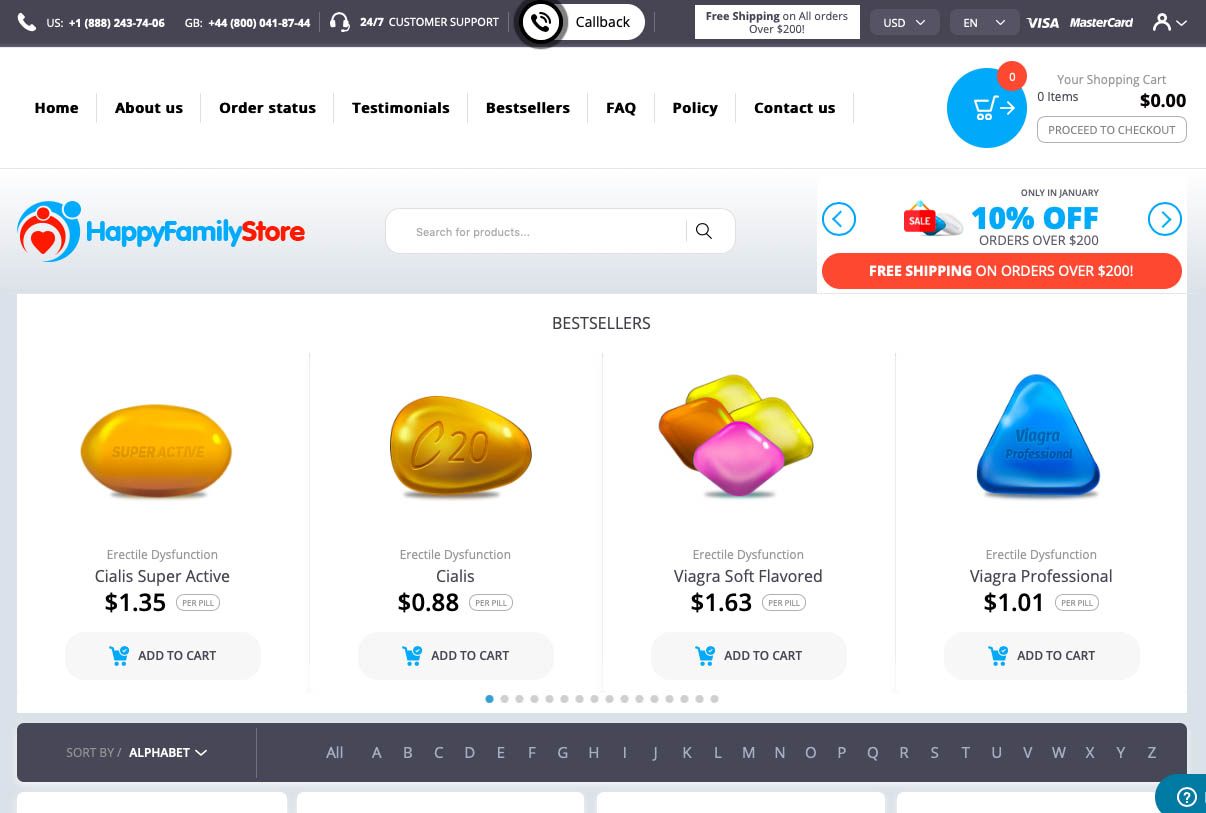 Pharmstore247.com sells drugs and supplements over the internet, or so the internet pharmacy claims. It doesn’t have that much working in its favor. The site’s design is surprisingly clean and attractive and that might confuse amateurs that don’t know anything about online drugstores. But if you have some experience in this field, it won’t take you that long to realize that the store is a scam, the kind that goes out of its way to pretend that it is Canadian. 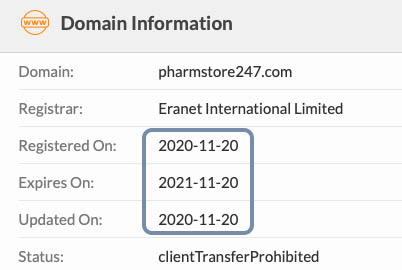 You don’t have to rely on a company’s claims to determine how long it has been in business. You can just look at the domain age. This site is just two months old. The domain was registered on the 20th of November 2020. Not only is the store incredibly young but its registration is expected to expire in just a few months.

You have to remain on high alert where stores with short lifespans are concerned. Any pharmacy that doesn’t expect to stick around for more than a few months won’t hesitate to defraud the people that buy from it. This is because it has nothing to lose.

The 1 percent rating the portal received from scamadviser.com confirms every suspicion you have about the company. They have a lot of questionable attributes, including a low Alexa rank, a poorly optimized platform, the absence of reviews from consumers, and an anonymous owner. As you can see, they have no redeeming factors. 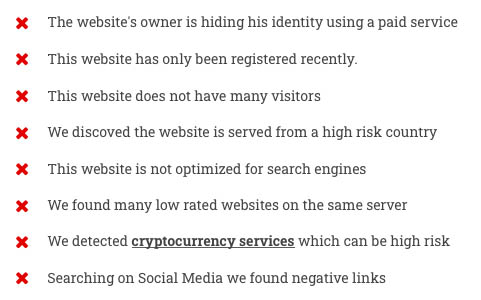 The platform’s design isn’t as impressive as you think. Yes, it is attractive. Additionally, their decision to include a picture of their headquarters encourages people to trust them. But if you are new to the pharmaceutical arena, you need to realize that this design is quite common.

Many internet pharmacies have used it. They tend to use the same name (Happy Family Store) favored by this website. Unfortunately, all those internet pharmacies are scams, or at the very least, people have dismissed them as potential scams that are not worth your trust.

In other words, the platform’s attractive design is only going to fool newbies. Anyone that understands this industry knows that even the image of their headquarters is fake. This is why the owner hasn’t bothered to publish a business address.

Any company with such an impressive office wouldn’t hesitate to reveal its business address. The owner’s decision to keep the address a secret implies that the picture of their premises is a forgery. This isn’t their only crime.

The owner’s hidden identity is a problem. It makes it difficult, if not impossible to find any tangible information regarding this drugstore’s operations. Even more annoying is the owner’s decision to redact so much online information. Everything they do suggests that they are hiding something. This is the behavior of a scam.

They do not have legitscript.com certification. Even though they keep describing themselves as a Canadian pharmacy, they are not recognized by CIPA either. In fact, no one recognizes them. They are so young that legitscript.com hasn’t even bothered to dismiss them as a scam. It doesn’t know of their existence, not yet.

Not only have they copied their design but they have also stolen their catalog, which includes medicine for:

It is difficult to take them seriously when they cannot even prove that they have the medicine displayed on their site. Even if they have all these drugs and more, they have still lost all their credibility because they do not ask for prescriptions.

Their list of payment options is quite impressive. It includes credit cards, electronic checks, and crypto transfers. Once they process your payment, you may have to wait for two to three weeks before they deliver your packages to you using Airmail.

The testimonials on their page are just as shady as everything else. The site can’t prove that they were written by real customers that purchased actual medicine. This wouldn’t be an issue if they had reviews on platforms like trustpilot.com. But they don’t.

They get a trust rating of 20% of trust. They earned it because of all their problems which include their design, which was copied from medical scams, an anonymous owner, and the lack of a business address, to mention but a few.