Home » Reviews » OrderPharma.com Reviews – This One is So Shady 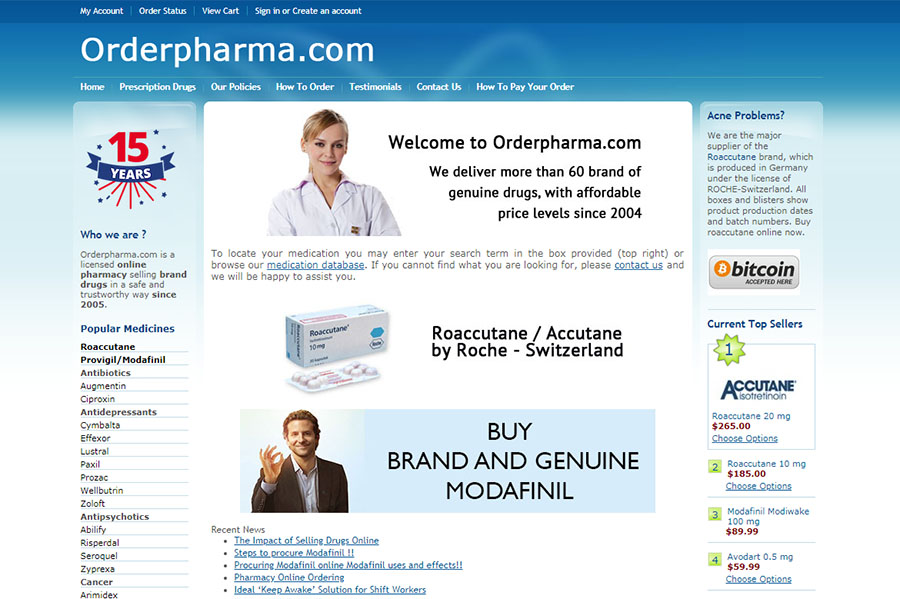 OrderPharma.com is an American website that sells and delivers drugs. On the whole, they sell basic medication used to treat a variety of diseases. But their specialty is Roaccutane, a drug that treats acne. They sell both the generic and brand name versions. The company takes the dispensation of Roaccutane very seriously.

This website was created on the 30th of January in 2004. It has technically been in operation for fifteen years which should bode well for its reputation. However, lifespans can be deceiving. These days, extensive experience is no longer sufficient, not for internet pharmacies. It has become the norm for budding entrepreneurs to purchase domains with long lifespans transforming them into internet pharmacies and essentially tricking people into believing that they have been in the business for a long time. For this reason, a long lifespan must be accompanied by other positive signs. 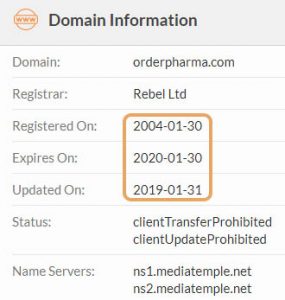 A legit website can’t just have a long lifespan. It must also boast strong associations with other authentic websites, particularly in its field. Some of these sites have ScamAdviser trust ratings as high as 100%. But others have ratings as low as 39%. And the majority of these portals have nothing to do with internet medicine. So they don’t really prove anything. It is worth noting that ScamAdviser assigned this online drugstore a trust rating of 83% which is quite amazing. But then again, any points that trust rating earns are immediately eroded by the absence of a valid SSL certificate and the fact that the setup of this website involved two countries.

This pharmaceutical firm claims to have been in business since 2004. But some earlier reviews of the company say that it initially claimed to have opened its doors in 2005 but then that figure was changed to 2004. They definitely hail from the United States. To use their services, you must open an account. That involves providing personal information such as email addresses, phone numbers, gender, date of birth and medical data such as pre-existing allergies. The website assures its users that it doesn’t collect any information without first asking for permission. However, if any visitor chooses to withhold the information requested, the pharmacy might be hindered in its ability to provide the requested services. 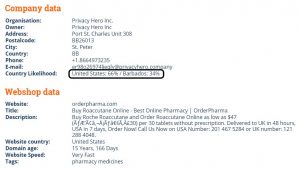 The people behind this firm say that they only collect personal information that is absolutely necessary to their operations. They also insist that all their lines of communication are heavily encrypted. But they don’t even have a valid SSL certificate so you can’t take their word on anything. Once you open an account on the firm’s online platform, initiating an order is a simple matter of locating the drug you want, providing your payment details and then sitting back and waiting for your package to arrive.

LegitScript calls this a rogue online drugstore. They have no legal authority to do business online.

Even though they sell drugs for ailments like cancer, depression, and hair loss, their emphasis is Roaccutane, Accutane and their various generic and brand name alternatives. The Roaccutane they sell comes from Germany. It is worth pointing out that this pharmacy doesn’t sell sexual enhancers, a rarity among internet drugstores.

The drugs sold here are cheap. Most of them are generic, so the website is in a position to acquire and then sell them cheaply. Their price tags are not the lowest on the market, though they offer coupon codes that can further slash the cost of their drugs. They initially accepted credit cards like:

But now you can only pay with Bitcoin and Wire Transfers. Deliveries to Singapore, the US, Nigeria, Japan, the UK, Hong Kong, Poland, Denmark, and Belgium are made via DHL Worldwide Express. Deliveries to Holland, Canada, Ireland, New Zealand, South Africa, Italy, France, and Spain are made using Express Mail Service. DHL can take up to 96 hours. Packages shipped via EMS take a maximum of ten days. Orders that are not shipped within five days will trigger a refund if your account has been charged. Orders that are either sent to the wrong person or which fail to reach their destination after twenty days will trigger reshipment or a refund.

There are testimonials to be found on this company’s website. You have people like Adam who received his order on time, Justin who appreciated the speedy service and Oliver who failed to receive his drugs the first and second time, but when he reached out to the website, the people behind the scenes did everything in their power to get Oliver his drugs. All these reviews and more are very positive. But there is no way of proving that they are real.

This is an internet pharmacy with a 15% trust rating. It looks unattractive. Its testimonials are suspect, and it doesn’t even have the regulatory authority to operate in any capacity.

2 thoughts on “OrderPharma.com Reviews – This One is So Shady”